This summer, a unique situation drew a lot of attention in North America just before the 2018 World Cup started in Russia: the joint bid made by Mexico, the United States, and Canada to receive the FIFA World Cup 2026 won against Morocco, the other contender. To my knowledge, it is only the second time that a joint candidature receives an event of this scale (the other one being the WC 2002 in Japan and South Korea). This could represent an important shift in the attribution of major sporting events as more and more “United” structures potentially arise in the next decades. It seems like a promising solution to what has been highly criticised in the Olympics and the World Cup:  the excessive costs for the host country. In this regard, this article is a first attempt to answer the question of the potential advantages of joint candidatures and of the cost-effectiveness of such economic decisions.

The Excessive Costs of Major Sporting Events and Their Potential Consequences

In a paper I wrote for an undergraduate course, I explored the potential impact of recurrent cost overruns of the Olympics in the “Olympic dream”. In this mostly qualitative analysis, I discovered several interesting features of the modern Olympic Games’ history worth mentioning. In terms of excessive costs, not only is the necessary public spending of the host country huge, but it is also systematically higher than anticipated prior to the Games (for both Winter and Summer Olympics) since at least 1968. Montreal, the second-biggest city in Canada, is the champion in this category with real ex-post costs being nine times higher than expected for the 1976 Summer Olympics. Furthermore, these Games have been an important moment in the Olympics’ history as the only city willing to receive the Olympics in 1984 (the host country being already selected for the 1980 Olympics) was Los Angeles. The city was ready to host the Olympics if and only if they were not asked to bear the inherent costs, which was accepted by the International Olympic Committee (IOC). This experience was such a great success (the local organisation committee registered 300 million dollars in surpluses) that the interest for the Olympics came back.

In my analysis, I noted three potential consequences of these excessive costs: a decline in the number of candidate cities, important expenses in security in the host country, and referendums that result in “no” in many cities. The first point is particularly insightful: in the two following figures, one can see that for both Winter and Summer Games, there is a declining trend in the number of candidate cities since 1992 (with some exceptions for the Winter Olympics). For the Summer Olympics, the number of candidates was also declining before the Los Angeles Games in 1984. The general population might also be less interested in hosting the Olympics. This can be seen through tremendous amounts of money devoted to security (since the 2004 Olympics in Athens, security expenses ranged from 450 million dollars to 1.5 billion euros) and the increasing difficulty to host the Games through a democratic process within the country. 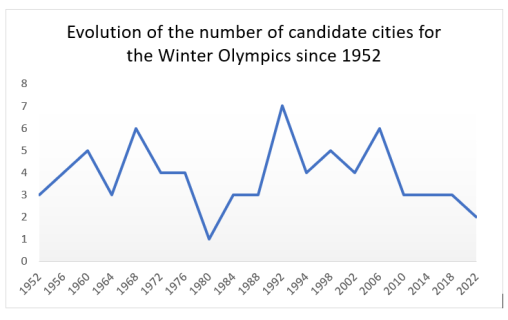 On the other side of the spectrum, one can look at the potential benefits of receiving major sporting events. In theory, the influx of tourists in the city and public investments in infrastructure should stimulate economic activity. However, empirical evidence is at best mixed on the first question: while some new tourists are attracted to the host city during the event, some simply substitute other touristic activities for sporting tourism. A certain crowding-out effect also takes place, with some people deciding not to visit the city and changing their plans because they expect it to be too crowded. For example, losses due to these effects were higher than the generated revenues around the Olympic sites in London in 2012. Furthermore, public investments in infrastructure for sporting events are not necessarily the most productive ones. In the case of sporting buildings, some of them are not used after the event takes place or they need large amounts of money for their maintenance. Moreover, some infrastructure projects that take place during the event might have been done anyway – not all projects can be attributed to hosting the event. In short, there are not so many tangible benefits to receiving a sporting event for the high costs incurred.

The Potential of Joint Candidatures

Having looked at the cost-benefit analysis of hosting major sporting events, one could ask why countries are willing to lose enormous amounts of money (billions or even tens of billions of euros) to host these events. Among the benefits a country could get, there are certainly advantages for specific interest groups, with some restaurants, hotels, and other facilities surrounding the sites obviously gaining from the event. Some also claim that some politicians may be putting money in their pockets: the Anti-Corruption Foundation, a Russian NGO fighting against corruption, claimed that the Russian government offered generous contracts to individuals close to the President. Another argument that has been put forward is the international visibility that competitions offer. While this is probably true, countries that would benefit the most from it are poor countries, but they rarely host the Olympics or the World Cup.

To counterbalance the high costs of being a host, the IOC authorises joint candidatures (either different cities within the same country or cities in different countries) since December 2014. This reform was directly aimed at reducing concerns about excessive costs of hosting the Olympics. Strangely, however, no joint candidature has been submitted so far, even if some discussions have taken place: for instance, Lake Placid in the United States offered to host ski competitions in a potential joint bid with Québec City in Canada in 2016 for the 2026 Winter Olympics.

Concerning the World Cup, the United 2026 is one of the only two joint candidatures to win its bid. Even if doubts remain on the size of the territory being a potential issue, separating the total cost between three countries should at least reduce the financial pressure on the main host, the United States. Luckily, the North American countries already have good stadiums that can be used and do not need to build new ones, but simply need to make small improvements to the existing infrastructure. Unfortunately, since joint candidatures are a new possibility in the mega sporting event business, more work needs to be done to confirm whether this opportunity could finally make mega sporting events profitable. One needs to wait for the real numbers to claim that United 2026 will bring positive net economic benefits.

TSE is a vibrant research center and school of economics where students, professors, researchers and staff interact in order to produce cutting edge papers, conferences and classes. The TSEconomist (TSE’s student magazine) aspires to put itself at the heart of these interactions offering its readers and contributors a rewarding experience.

Our mission is to provide a constant platform of communication between all members of the TSE community, its visitors and alumni. Our magazine, and this blog, are run by the vibrant TSEconomist team, with more motivated members joining us each day. We invite you to do the same!